skip to main | skip to sidebar

Hey fellas, long time no see, or read or whatever! Missed quite a few occasions to tell you more about li'l ole me, but, as always, I'll catch up sometime. Anyhoo, here is my latest field of interest: creating, on my spare time, an outfit based after the design of the character I'm drawing these days. The name's [Zatanna] and she's a super hero/magician in the DC Universe. I thought it would be cool to have a model don the costume and stand around at our booth during conventions, to promote my work on the title.
So let me show you the work in progress that will eventually lead us to a sexy girl in a costume that includes fishnets! ' nuff said! 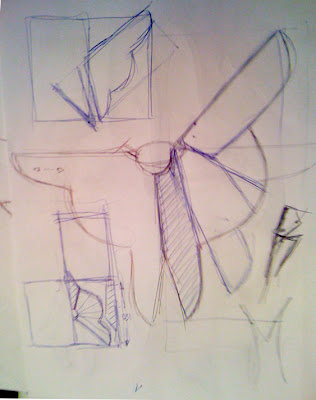 First, of course, everything begins with a sketch, so that I can explain what I have in mind to my friend Marylise. She accepted to help me on this project by sewing the whole thing together. And man, thanks to her skills, this costume is going to be simply awesome!

A week or so before, we went to the fabric district in Paris, to get the right stuff for Zatanna. She deserves the best. Geez, those chicks don't come in cheap, ya know? Anyway... We had the silky black fabric for the outside and a red satin for the inside. You know when you've found excatly what you had come for. This was no exception for Maylise and I agreed on the rolls of fabric instantly!

So i drew quickly and handed the doodles to her, she made a few changes and suggestions to make the cutting easier, the folds more ample... That was my main concern: I wanted heavy folds on the cape so that it'd convey a sense of wider stature to the character. 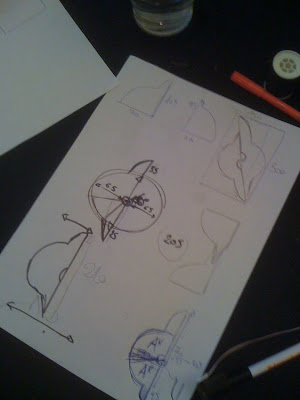 Once we agreed on how long every part should be, we started measuring on the paper that would serve as a guide for the cutting. and drew a pattern. 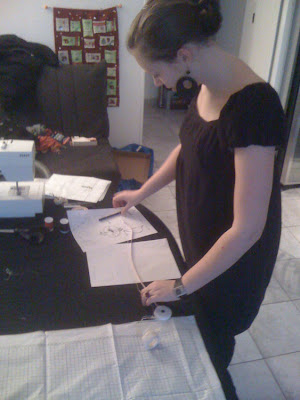 As you will see later, the cape consists un two longer pieces in the front -so that idealy, the cape, when spreading over the shoulders, would be in the shape of a butterfly ( that's me tapping into my feminine side, now let's move on... ) - with a tail as in a tux, that would accentuate the butterfly feel... Here we indicate with different colors, what would be the extra fabric we need for the hem ( black ). The brim of the cape being indicate in red. 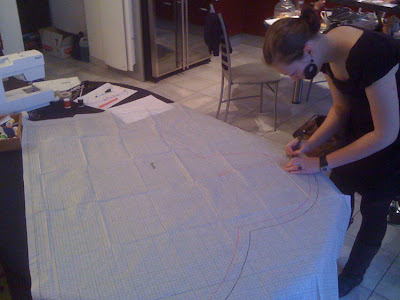 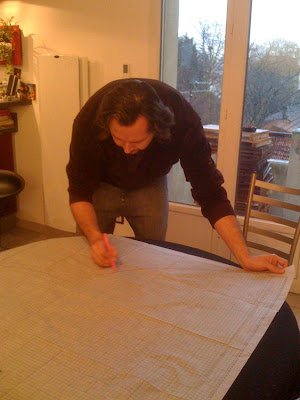 Marylise started to cut ( while I was still cutting... She's faster, no hesitation, no flaw of the hand... when I was shaking, afraid to ruin the pattern or later, the fabric! ) 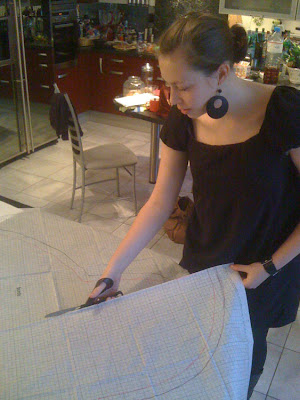 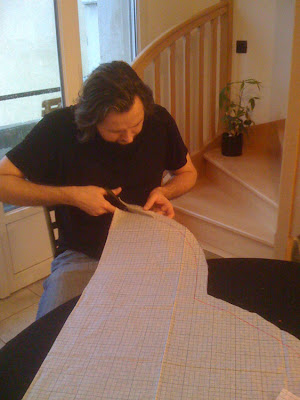 It's a task of patience... pinning the pattern to the fabric, in order to cut the exact shape you've just designed ( make that thirty minutes ago... I said I was slow, and afraid to miss! ) 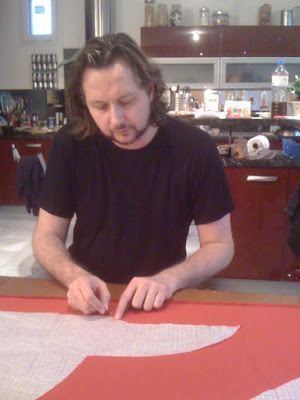 So I'm a joker, so what? Meet Zatanno, mortals... And cower! 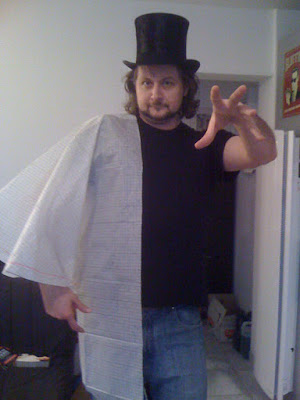 We were so busy cutting the fabric that none of us thought of taking picture of that moment... sorry guys.

Just know that it went well... And that Marylise started to pin the four pieces of the back together ( two black pieces to red for the inside, shall I remind you... ) to get a glimpse at what it should look like, in the end... after all, we are only half-way done: there's still the whole sewing process! " It's the easiest part. " she says... 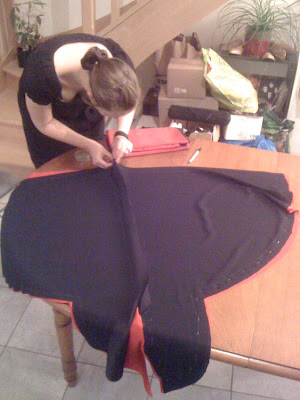 So here's what it looks like so far. Not bad... I can see we are on the right tracks. Note: the fabric is not as shiny as one would expect. Of course, fellas and fellettes! We work inside out, to keep the good side of the cloth protected! 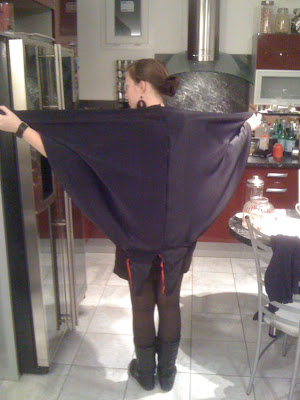 After a fex hours in the afternoon, I had to run out and thought Marylise would wait for another session together to finish the cape... But she was so excited in working on sucha unique piece, that she went on with it! she kept sending me text messages on how much she enjoyed helping me with this! She sent me pictures in the evening, to show how it looked once completed. 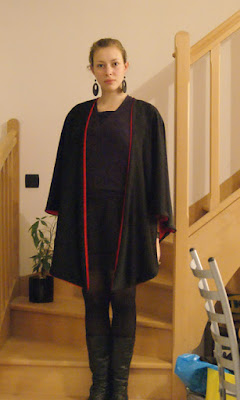 On the back view below, you'll notice the tux tail. 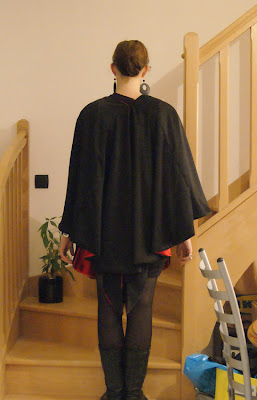 We're gettign closer and closer to a pretty nifty Zatanna costume, wouldn't you say?
I told her to take a few pictures on the next day, with a top hat that I knew her boyfriend had. She also had a bow tie that fitted to a T! 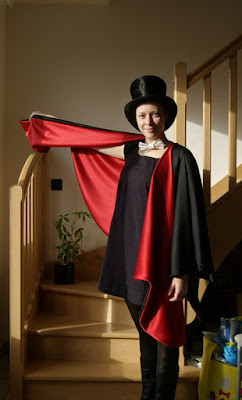 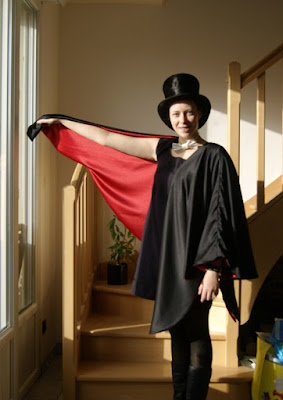 Voilà, Ladies and Gents! More pics to come soon, for we are trying to have this costume ready for the french con in February! Not to mention these will hopefully be with the model who's actually going to wear it there... heheh. Behave, boys! 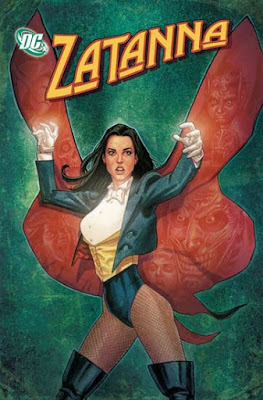 Welcome to you all! Those of you who know of my more commercial art might be surprised to learn there's another facet to me. Or not. Most of us artists usually spent a fair amount of time doodling, sketching, in the subway, in parks, in cafés... If you are an artist and you don't do this, understanding the world you live in will take muuuuuuch more time!